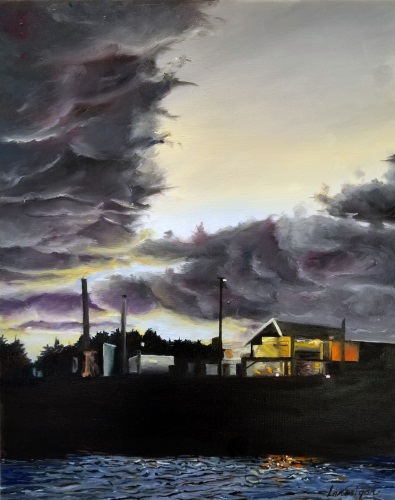 Lobster fishing may conjure images of colorful old salts hauling wooden lobster traps into their dories. The reality, as I tried to show in Twilight on the Fish Pier, is much different. At least it is here in Stonington, Maine.

Stonington lands more lobsters than any other place in Maine and possibly the planet. That’s quite an achievement considering only about a thousand people live here. But the question nags: How long can Stonington fishermen continue to haul a living out of the sea? As the ocean gets warmer, the lobster keep moving north. Everyone in town wonders if — and some wonder when — the lobster will migrate to Canada. In the past year, we have all heard the words, “If the lobster go away…”

So my painting also poses a visual question: Is the lobster industry in its twilight?

Last year, fishermen (and, increasingly, fisherwomen) landed 119,640,379 pounds of lobster in Stonington. Fishing accounts for about three-quarters of the town’s economic activity.  Fishermen sink a lot of money into their fishing businesses. Boats cost hundreds of thousands of dollars and traps — you can use 800 at a time — cost about $100 each.

Stonington, located at the southern tip of Deer Isle, juts into Penobscot Bay. It’s an inlet of the Gulf of Maine, where lobster congregate more densely than anywhere else in the world. One reason for the abundance of lobsters may be the demise of cod, which prey on lobster. The cod fisheries are pretty much exhausted, though I did hear some cod have been spotted recently.

Lobster fishermen generally use herring as bait, but federal regulators have limited the herring catch. That makes bait expensive and hard to get; “bait crisis” is another expression you might hear around here.

Some reporters have written that McCaskey’s restaurant should help local lobster fishermen. They apparently assume Stonington’s  fishermen sell their lobster to local restaurants. That would mean 120 million pounds of lobster are eaten locally — or 120,000 pounds per capita.

Um, no. A lot of the lobster goes to China. Once the fishermen catch the lobster, many of them take it to the Fish Pier, where the supply chain to China begins. Big refrigerated trucks take them off the island. The sound of engines, both marine and automotive, is as familiar here as the wail of the foghorn.

When President Trump hit China with tariffs, China hit back with tariffs on lobster.  That has caused a good deal of anxiety here. China’s tariff dwarfs the Mueller report as a topic of conversation. But so far, it seems, so good. Some middlemen are selling lobsters to Canada, who sell them to China.

So it isn’t quite twilight on the fish pier. And it may never be. But there are definitely clouds on the horizon.